Curious about what’s going on at the testing sites? 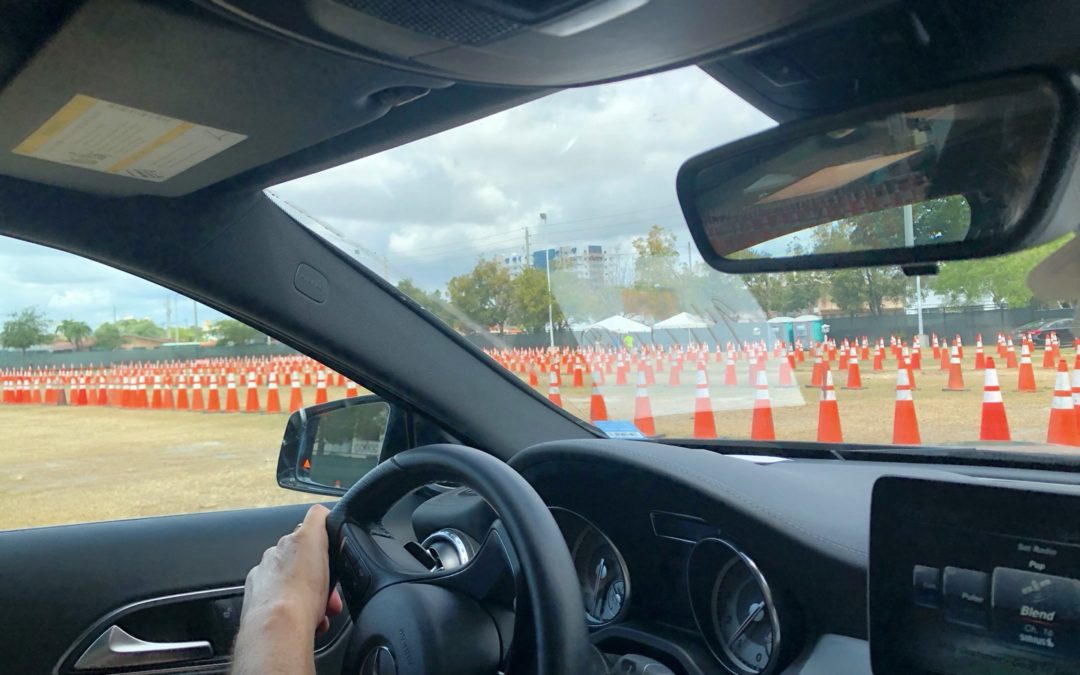 Having returned from a wedding in Los Angeles in early March where many were already on lock-down and self-isolation,  and suddenly developing what looked like “pink eye” or conjunctivitis which didn’t seem to improve, I decided to go for Coronavirus testing. Pink eye is one of the many symptoms associated with the virus, and I’m in the over 65 age group.

The good news is that I don’t think I have it, or had it, but despite being tested twice, nobody is really certain.

The bad news is the process of testing here in Miami-Dade County has been challenging, to say the least, and not especially encouraging. It’s raised many questions in my mind. Here’s what happened to me in the past few weeks, in five brief episodes:

Episode 1. Getting an appointment for the test.

I was on hold for about 45 minutes. A very kind lady took my vital information – name, age, address, last four digits of my social security, phone number, and symptoms. I told her the truth: no high fever or shortness of breathe but I did have inflammation in both eyes that wasn’t healing too well.

“I can’t drive because of my eyes,” I told her.

“Whoever is in the car with you will need to take the test, too,” she advised.

So I gave her all of my friend’s information. In turn, the official supplied a confirmation number I needed to have ready for the testing check-in.

Additionally, she told us we needed to put our name and phone number on a piece of paper in the windshield inside the car along with our driver’s license.

“Are there any bathrooms we can use there,” I asked.

“No, you can’t get out of the car and if you do, you won’t be able to take the test,” she advised.

She also recommended that we bring some water and food, as we could need to wait up to two hours, depending on who’s in line.

“Is there anything I don’t know to ask,” was my final question. “No,” she replied.

We arrive at Marlins Park just after 11 am, following a long line of bright orange cones to reach the first tent into the testing area. It was a typically sunny Miami day, and I was wearing very dark sunglasses from the ophthalmologist over my regular glasses as the eye condition made me exceptionally light-sensitive.

You had to go 5 mph, maneuvering through about 10 lanes made with cones on either side. Surprisingly, we were the only car in that area.

“What’s your confirmation number?” the masked professional asked through our closed windows, with a clipboard loaded with papers and numbers.

I gave her the number the nice lady had given me. And then the situation began to crumble.

“That’s for you,” the testing check-in official stated. “We don’t have a record for him. You can leave, take him somewhere, and come back.”

Shouting through the window I told them I’d only been given one confirmation number for both of us.

At that point, my irritated friend pointed out, “She can’t drive.”

For a few minutes, the officials at the tent argued amongst themselves. Finally, gratefully, they put a mark with a colored pen on our window and waved us through to the next stop.

We passed a series of check-in points until finally reaching the actual testing tent. We were shocked to see only about four cars ahead of us, given the warning to come prepared with food, water and not to go to the bathroom.

Dressed head-to-toe in a white suit looking like an astronaut on the moon, the tester asked each of us to open our car window, one at a time.

“Say ahhh,” he requested, sticking a swab deep into our throat. “Someone will call you in 7 days.”

And we left. In less than 30 minutes, the testing was over.

Episode 3. Getting the results?

Seven days would have been Tuesday, April 14th, but we didn’t get a call.

On Friday, April 17th, I called the County number where I’d make the appointment. She gave me another number to call. That person said they didn’t have the results, that I’d hear in 3 days, but I could go to an online laboratory site and register.

It’s called BioReference.com. When I checked in for my results, it said “Inconclusive,” and recommended I try to get tested again. My friend’s record was nowhere to be found.

A few hours later, I got a call from Miami-Dade County Health Department to share my “medical information.”  The official reported that my results were “Inconclusive,” and that I needed to return for testing.

On a whim, I asked if she could tell me my friend’s results. She agreed if he got on the phone himself.

“Negative,” she said, and we were both quite relieved.

(For a complimentary 30-minute consultation with Anne Freedman to talk about how you can use video and blogging now to keep yourself in your clients’ minds, please click here🙂

Episode 4. Another test and more questions.

On Saturday, April 18th, I called to make an appointment for another test. Fortunately, my eyes were finally getting back to normal and I could drive myself.

“We’re only making appointments for tomorrow,” the official said.

“Are you open on Sunday? “ I inquired.

“Every day,” he replied. “Be sure and put your phone number and the last four digits of your social security on a piece of paper in your window. Bring water and food could you could be there for awhile.” And he also mentioned there were no bathrooms available.

On Sunday, April 19th, a little after 11 am, I found my way to Marlins Park. With me were a water bottle, a banana, and some mints.  Big electronic signs said, “Keep Your Windows Up.” I found what looked like an entrance and started to go in, but a police car beeped a warning sound so I backed away. I drove around the stadium looking for another entrance, couldn’t find one, make a u-turn and came back to the original entrance site. There were no other cars on the street.

As I again tried to turn into what seemed to be the entrance, the police car’s microphone blared loudly: “You need to go down the street to enter where the cones start.” His window was dark and I couldn’t see anyone inside.

A bit ruffled, I drove the opposite way and eventually found the cones on an adjacent street where you were supposed to enter. Following them around the stadium, I found myself in the same staging area my friend and I had visited nearly two weeks earlier.

This time, however, there was only one wide row made of orange cones leading to the tent. The others had been closed off. And again, I was the only car and I wondered why.

At the check-in tent, no problems. They waved me onto the next checkpoints until I was at the testing site.

“Roll down your window,” the white-suited testing official asked.

Just like before, she said, “Say ahhhh,” put the swab down my throat, and we were done.

But she didn’t tell me when to expect results. Or how I would get them. And I didn’t ask.

The next morning, April 20th, I got a call from Miami Dade County Health Department at 8:10 a.m.

“We have the results and they’re inconclusive,” she said.

“Are these from the test I took yesterday?” I asked.

“You took the test yesterday? No, these are from April 7th,” she replied.

“Thanks, but I already have those,” I told her.

Closing Episode. Results but no results.

On Tuesday morning, April 21, I got an email from BioReference saying they had the results of my test from my second test, the one from Sunday .

“Not detected,” the site reported.

That’s not the same as negative but it’s better than positive. I guess.

I’m still waiting for an official from the Miami Health Department to call me. But for now, I am done for with testing!

My questions for those managing this system are these:

Why are there so few people being tested at Marlins Park when authorities are saying we need more testing before being sure it’s safe to return to normal ways? What’s happening at other locations?

How is the reporting of results being coordinated?

How is the word getting out about where and how you can get tested?

I encourage you to get the answers to these questions in your area, and help spread the word about testing availability.

For a complimentary 30-minute consultation with Anne Freedman to talk about how you can use video and blogging now to keep yourself in your clients’ minds, please click here: